Estimating Abundance of Gars and Bowfin in Illinois

Our lab has been working on estimating the relative abundance, distribution, size structure and age structure of gars and Bowfin throughout major watersheds in Illinois using mark-recapture studies. Mark-recapture studies are an effective method for estimating the absolute abundance of individuals in a defined wild population. When applied over broad spatial scales, mark-recapture studies require the sampling and marking of large numbers of individuals over time to adequately execute the assessment. The data we gather from these studies will be one of the first to document baseline population parameters of these ancient species and can be used to compare population parameters across watersheds in the state.

From 2015 through 2019, state agencies and universities have been assisting the Sport Fish Ecology Lab with data collection of gars and Bowfin throughout Illinois. These include the Illinois Department of Natural Resources Fisheries Division (IDNR), the INHS Illinois River Biological Station, the INHS Population Monitoring Program (LTEF), INHS Great Rivers Field Station, Eastern Illinois University, Western Illinois University, the Illinois Bowfishing Association of Illinois, the Bowfishing Association of America, the Tri-State Bowfishers, Missouri Department of Conservation, and personal communications with anglers. 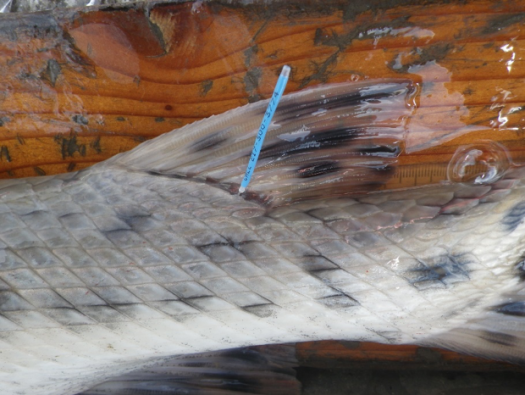 Researchers are documenting the total length (mm) and weight (g) of each captured fish, affixing a T-bar anchor tag (containing a unique fish ID number and contact information for INHS) into the dorsal musculature as pictured at left, removing the left pectoral fin ray for age estimation, and then releasing individuals at their location of capture.

A total of 5,039 individuals (1,259 Longnose Gar, 2,649 Shortnose Gar, 250 Spotted Gar, and 872 Bowfin) have been collected from the Wabash, Lower Illinois, Upper Illinois, Kaskaskia, Upper Mississippi-Meramec, Lower Ohio, and the Upper Mississippi-Skunk-Wapsipinicon River Basins for this project. The majority of fishes in this study were sampled from the Lower Illinois River and Wabash River basins, largely due to the extensive amount of fish survey effort conducted by INHS and our collaborators.

There were very few recaptured fish in our study and only 19 tagged fish (out of 5, 039 total) were collected more than once throughout the duration of the project. Specifically, 15 fish were recaptured from the Lower Illinois River (12 Bowfin and 15 Shortnose Gar), and 4 fish were recaptured from the Wabash River (2 Longnose Gar and 2 Shortnose Gar). Further age estimation and analyses are ongoing to describe age and size structure of these populations. These data will provide the basic information about the population structure of these ancient fishes throughout Illinois watersheds to aid in research-based management and sustainability practices.