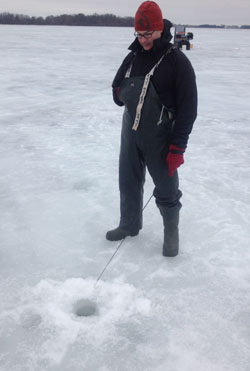 It is no longer the case that  all fish caught by recreational anglers are taken home to be eaten. Many fish are released because they are not the species the angler was looking for, or they were not large enough to legally keep, or because the angler is practicing voluntary “catch-and-release” and returning fish to the water after capture.

Regardless of the motivation, it is often assumed that released fish are able to recover quickly, presumably to grow bigger and be caught later. However, recent work has shown that released fish may suffer from severe physiological and behavioral impairment after release, or even mortality. The severity of disturbance, and the likelihood of mortality, is impacted both by how the angler handles the fish (especially how long the fish is held out of the water) and the conditions at the time of the catch (temperature, water quality, etc.).

While a vast array of research has been done on captured fish at warm temperatures, studies are lacking on how fish are able to recover when they are caught by winter ice-anglers. Ice-angling is a very popular recreational winter activity in the northern United States, where anglers are able to catch fish through holes drilled in the ice of the many frozen lakes. 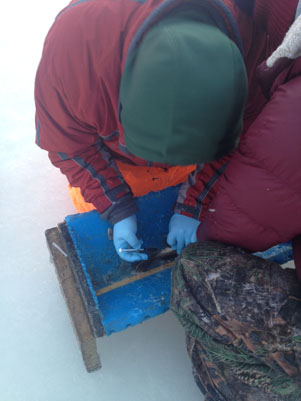 At the Illinois Natural History Survey, we combine both field studies and laboratory methods to evaluate how fish recover from angling at winter temperatures. It is well known that water temperature greatly impacts the physiology of fish, and understanding how fish recover after capture is crucial to researchers and managers evaluating the impact of angling on fish populations. This research will fill a huge gap in our knowledge of fish recovery, and guide recommendations for the best means of capturing and handling fish at winter temperatures.