Recreational fishing is a multi-billion dollar industry in the United States. Many local economies depend on the presence of healthy fisheries, which feature abundant fish that are also easy to catch. The reduction in sportfish populations as a result of over-fishing has long been a concern, however recent research has shown that sportfish populations can also be impacted by a process known as Fisheries-Induced Evolution (FIE).

FIE occurs when certain characteristics (whether they be life history, behavioral, physiological, or genetic) lead individual fish to be more likely to strike a fishing lure and be caught by anglers. If only fish with the “lure-striking” characteristics are harvested, the population will evolve away from those characteristics until they are reduced or eliminated entirely. This could greatly impact the fitness of exploited populations, since traits associated with a willingness to strike a lure may also be associated with critical behaviors, such as nest defense, social behavior, feeding, and predator avoidance. 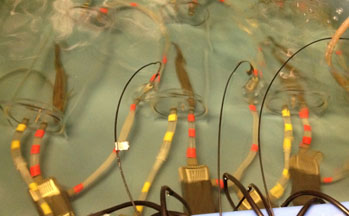 At the Illinois Natural History Survey, we are in the process of conducting experiments assessing whether certain behavioral or physiological traits are associated with a fish’s propensity to strike a lure. These traits include assessments of aggression, sociability, and boldness, as well as physiological characteristics such as metabolic capacity and stress physiology. The overall goal of this research is to clearly define which traits in fish are linked with an increased willingness to strike a lure, and make predictions as to the possible impacts of fisheries selection on those traits in wild populations.

For this research, we are focusing on a pair of common species in Illinois, largemouth bass and bluegill. Work on these species will elucidate what traits may be under selective pressure in fished populations, with attention to the behavioral and physiological traits which have not been studied to this point.